In Autumn 2019, a team of two students in Visual Rhetoric offer a creative interpretation of the impact of refined sugars on both human health and on larger culture.


They juxtapose images, set against haunting sounds, of popular sugary products with drugs and their effects on contemporary Japanese culture. 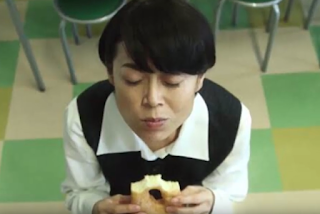 The short production plays on the style of a new Hollywood horror film trailer.

The team use ambiguity to raise many important questions about the effects of both drugs and sugar on society. The video can found here. 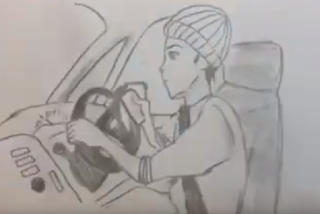 Two students in Visual Rhetoric for Autumn 2019 develop a short story and musical score for a PSA on the dangers of texting and driving.

They use a Stop Motion app and iMovie to produce an animation with a brief and stark statement on the potential effects of operating a motor vehicle while distracted by a handheld device.

The production can be found here.

Dr. Firouz Gaini, Professor of Social Anthropology at the University of the Faroe Islands has been in Okinawa over the past week conducting research on the interesting but little-known connections between the Faroe Islands and Okinawa. During his present stay, he is interested in meeting with young people and other academics to engage in dialogues, share his own perspectives and to understand the perceptions, attitudes, and various outlooks that local people have on the future. 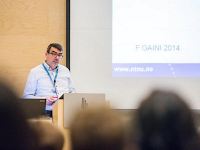 He will give a lecture on Thursday at 1:00 in Shalom 1-1 to students and faculty interested in his present work. This will feature an introduction to the Faroe Islands, a focus on its political history, an introduction of him and his research with an explanation of why he has traveled all the way to Okinawa, and what he would like learn from students and other researchers here.

For further information, contact Professor Chihiro Sakihara or Daniel Broudy
Posted by . at 10:53 PM No comments:

Hope for the Future in the Curiosities of Young People: Reflections on Field Trips

Each year, first-year students interested in understanding current issues beyond what they read or hear in national and local media, have a chance to take a field trip to the northern part of Okinawa Main Island. Their own expressed interest in the Freshman Seminar (zemi) is the starting point for an organized trip. Over the years, I have noticed that new students fresh out of high school tend to fall into a few fairly distinct categories: a) their perceptions of the protest movement in Henoko and Takae are shaped by pro-base friends or family, so they believe that the protestors are probably communists or supported by China; b) their perceptions are shaped largely by local media, so they tend to have a negative attitude toward base expansion into Oura Bay; c) their perceptions are shaped by national media, so they tend to say that national security should come before anything else. 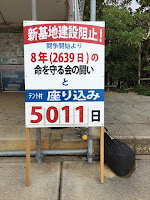 Those very few students who insist that local newspapers are biased against the US bases also admit, at the same time, that they themselves uncritically accept the now 72-year American military presence on their small island. After all, they suggest, they grew up with the bases and can hardly grasp any alternative reality beyond present conditions. Nevertheless, no matter what media students say they read, what stories or rumors they hear from friends or family members, or what Nettouyo (mostly anonymous Netizens who naïvely embrace and disseminate radical far-right ideology over the Internet) say about the protestors, most young people in Okinawa appear to demonstrate remarkable patience and superb skills in remaining open-minded. They are extremely well balanced, perhaps to a fault. 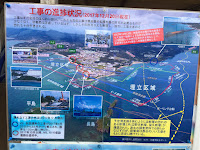 The impending destruction of parts of the marine environment in Oura Bay and the subtropical forest in Takae has long been a divisive issue locally. So outrageous, people perceive, is the planned assault against the environment that the battle to save it has spread to far-flung fields of conflict across the world. Of course, no one in any category wants to see their own backyard being bulldozed or buried under mountains of landfill and concrete, especially for a new military endeavor, but the young people offer larger Japanese society considerable hope that reason is still a hallmark of the intellect and will prevail at some point in the future.

What is perhaps most remarkable is the age group itself. Young people beginning college tend to be largely interested in socializing and locating the next party off campus when their studies aren’t intruding on their larger university life. Though they are also often distracted by the digital world of their handheld devices, they are also deeply concerned by the unfolding destruction in the northern part of the island. No matter what they believe is actually motivating the protest movements in Henoko and Takae, they register deep concern, unease, and mistrust about what they sense is the unfair treatment of Okinawa by powers that are remote and distant. This, they feel, is intolerable. Should the larger forces of central planning ultimately prevail upon this small island, the young people moving upward through their university training will very likely not forget the manipulations they are witnessing.

This October 31 (Saturday) and November 1 (Sunday), Dr. John Whalen-Bridge, author and professor of American literature at the National University of Singapore, will visit Okinawa to deliver the keynote address for the forthcoming "Development, Destruction and Desecration: Studies in the Manipulation of Nature" conference hosted by the Graduate School of Intercultural Communication in conjunction with Okinawa Christian University. The presentations and lectures are scheduled for the 31st of October, and a guided bus tour of the island is scheduled for the 1st of November.

As a former visiting scholar at the University of the Ryukyus, Professor Whalen-Bridge has long been involved in researching and writing about various desecrations of nature and language, and the destruction of culture - paying particular attention to the plight of the people of Tibet. He will be available also for interviews and to discuss his latest book, Tibet on Fire: Buddhism, Protest and the Rhetoric of Self-Immolation (Palgrave Macmillan), due out in mid-October. (Please contact conference organisers for his itinerary.)

Dr. C. Douglas Lummis, Visiting Professor and Emeritus Professor, Tsuda College, will also be supporting the conference goals with a special lecture entitled, "What Was Modernization/Development Theory?" This lecture will provide a fascinating analysis of the historical processes in the mid-20th century that have given shape to current concepts and practices of development and modernization.

Also, joining the effort to develop meaningful discussions of the social effects of other manipulations of nature will be Kenneth H. Young CD of Vancouver. Mr. Young was selected as Canada's representative at the Second International Conference of Victims of Agent Orange in Hanoi, Vietnam. His research, writing and advocacy focus on the uncovering the truth about the uses and effects of the rainbow herbicides on nature and on human health.

These presenters, among others from Okinawa, the United States, and Indonesia, will discuss the efforts of people to challenge and question injustices, critically analyse official narratives, and hold responsible parties accountable to the law.

The Call for Papers for this conference can be accessed at Okinawa Christian University's official homepage in either or English or Japanese. Please visit the site by clicking here and scroll down to the date 15/07/10.
Posted by . at 6:28 PM No comments:

This November 1 & 2, Jon Mitchell, journalist and lecturer at Tokyo Institute of Technology, will visit Okinawa to deliver a keynote address for the forthcoming Agent Orange and the Politics of Poisons conference. 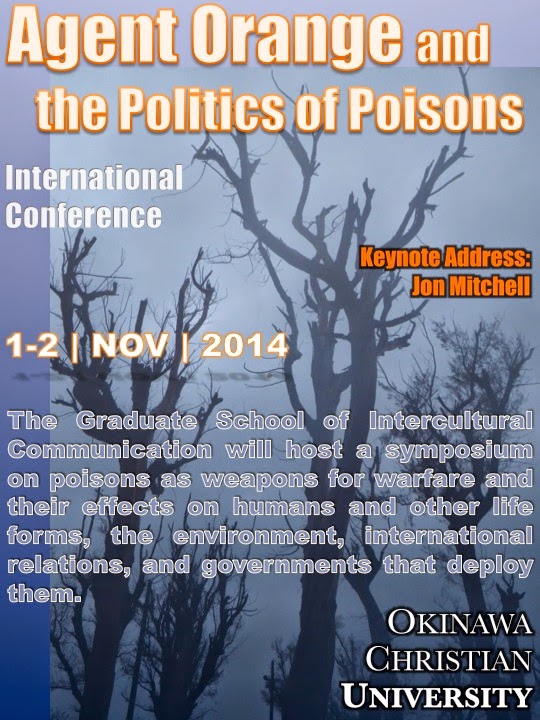 Joining the effort to develop fruitful public discussions of the lingering effects of Agent Orange and other chemicals are Ms. Nguyen Thi Hien, President of Da Nang Association of Victims of Agent Orange (DAVA) and Mr. Phan Thanh Tien, Vice President of DAVA. Ms. Mayu Ino, President of the NGO Seed to Table will also repot on the effects of Agent Orange on people in Ben Tre Province. Dr. Masami Mel Kawamura, Director of Citizens’ Network for Biodiversity in Okinawa, will join with journalist Ms. Natusko Shimabukuro and Mr. Hideki Yoshikawa to lead a discussion of Agent Orange impacts on Okinawa and to screen the documentary film Defoliated Island. Dr. Kunitoshi Sakurai will also be present to deliver a talk on the remediation of land formerly under the control of the US military in Korea and Japan.

These presenters, among others from Okinawa, Canada, the United States, India, and Indonesia, will discuss the extraordinary efforts of common people to challenge ongoing injustices, to question official stories, and to hold responsible parties accountable to the law.

For more information, contact Daniel Broudy or Makoto Arakaki at politics.poisons@gmail.com or visit the conference site hosted at the Campus tab on OCU Gazette.

The Call for Papers for this conference can be accessed at Okinawa Christian University's official homepage in either or English or Japanese. Please visit the site by clicking here and scroll down to the date 14.05.07.

Reflections on the Impending Arrival of the Osprey

The most important mission of the government is to protect its own people. But, what the Japanese government is about to promote is bringing the dangerous Osprey to Okinawa.   Even though we are demanding that the Osprey not be deployed here, the government insists.

Isn’t this a kind of rape, a forceful violation against the will of the people, of our consent in this democracy?   All media never fail to tell us that we are threatened by North Korea and China. But, I think the immediate threat is right in front of us from both our national government in Tokyo and from the United States.

Those governments are not trying to understand Okinawa people’s grief and frustration.   We don’t want to hear any more explanations about the supposed necessity of the Osprey on this island. The occupiers do not need to try to prove anymore that this aircraft is safe. The evidence is clear that it isn’t safe. Many crashes prove that it is a danger.

I’ve thought about what I can do to show my anger and resentment for not being heard in my everyday life.   I can express my feelings on my own car. I can drive my car with the stickers that communicate the message that is apparently not getting through to politicians and to the military.   I hope that all cars in Okinawa wear this sticker and fill the streets, roads, and expressway with the message that we want to be heard. “No Osprey!”

An English message to the Ryukyu Shimpo from one of my Okinawan students (67 years young).

visit us in Shalom